I have a couple of possessions that have been part of my everyday routine for a decade or more. They are not necessarily valuable or one-of-a-kind, or even very unusual.

One of them was a Capricorn mug I got in Thailand when I was living there in the late-1990s. Almost every day since then, I have had at least one cup of tea from this mug. 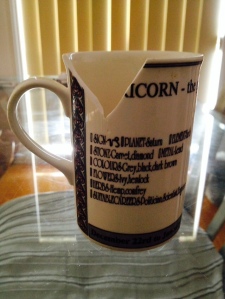 Although the gold leaf that used to decorate it has almost gone, it seemed to be going strong. But a few days ago, it broke when it fell into the sink. Just broke, just like that.

Now I have to throw it away, and I will. But I will miss it.

Knowing it couldn’t last too much longer, I recently searched for another on the internet, but there is not one to be found, it would seem, although these mugs were available in a shop at a particularly popular shopping centre in central Bangkok for six years or more.

A couple of years ago, I even emailed the factory that makes Royal Bone China in Thailand, hoping they might have some remainders. They replied very cordially, but no luck: the cups had all been sold years before.

So now all I have is these pictures. If ever you see one, let me know, won’t you?