The first lettuce from our own garden

All my adult life I‘ve steered clear of gardening. Despite my mother being a keen green-thumb and growing our own produce, such as potatoes, mint and parsley, when I was young, I’ve always thought it wasn’t my ‘thing’.

Then a funny thing happened. A few years ago, I started watching a half-hour Saturday evening TV show called Gardening Australia. I still wasn’t into gardening itself, but I began to appreciate the peace and beauty of home-grown plants, particularly, as I’m a bit of a foodie, the edible kind.

In April this year, we moved out of the city to a suburb that is almost rural, to a street in which people take gardening seriously. And although we’re in a townhouse with only a very small courtyard, we’ve started a garden.

We’ve got lettuces, radishes, sweet corn, tomatoes, garlic, chillis, herbs such as rosemary, thyme, basil, parsley, coriander, chives and more. My husband has even started a small and joyful flower garden in one corner.

Because I’ve been watching Gardening Australia attentively for so long, I’ve found that I’ve picked up quite a bit of gardening knowledge without realising it. Soil types and planting widths and watering tips: no longer are they useless information to me.

On Friday night, we had the first lettuce from our garden the star of a salad for dinner. Nothing ever tasted so good—bursting with flavour, nutty, buttery almost, and crunchy.

I teamed it with simple fare: tomatoes and multi-coloured capsicum (not our own, yet); and seared scallops and prawns with my hot butter-garlic-chilli-lemon pepper dressing on a bed of steamed basmati rice.

Best meal I’ve had in ages!

The other day at work, some of the ESL (English as a Second Language) teachers were trying to think of the title of a great English-teaching text they remembered from the 1990s. It incorporated stick-figure drawings on flash card-like pages that were ring-bound.

There used to be a copy hanging round the old staff room, one said, but we had moved to a new building, and the little flash-card book had been forgotten (and had probably been thrown out). No one could remember the title or author.

It made me think of a book I had as a child to help me learn German. My father had visited Munich in Germany not long after the 1972 Olympics and had brought me back a poster for my wall. I was very young and thus didn’t know anything about the violence that had occurred there. But I had become entranced with teaching myself German (and went on to study it at high school and university).

The book I’m thinking of was a small paperback and it was part of a language series. It has long gone from my library, unfortunately. I also had a hardcover Berlitz book that I loved.

In my final year at school, I won a prize for German speaking from the Goethe Society. The prize was two lovely volumes of German fairy tales and songs. The song book was illustrated, with music, and I had it until recently. Now I can’t find it anywhere. I can only think that I must have given it away with a lot of others, in a fit of needing to make room in my bookcases. Why does it always seem that the book I give away is the very one I want not long after? 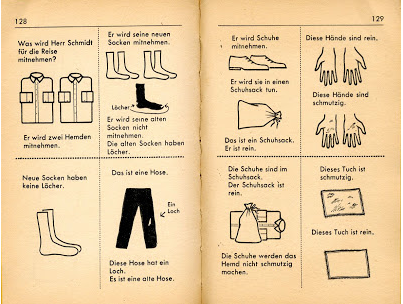 There are websites that can help you identify books whose titles and authors you’ve forgotten. One is What Was that Book? Many of the postings on that are novels people read as children and half-remembered.

And what do you know? Today, I did a search for my German Through Pictures book and found it straight away! It was by I. A. Richards, I. Schmidt Mackey, W. F. Mackey and Christine Gibson. Itwas first published in 1953, though mine was a 1972 edition. Amazingly, I found a blog post  which reproduced some pages from German Through Pictures here. Thanks, Mary Caple from Montreal!

I could also buy the book via Amazon, priced from $7.92-$221.95, depending on quality and collectibility, if I wanted.

I think we should bring back the  series, as it’s so easy to learn from. There was also a French version—and perhaps there were other languages available, too.

Oh, and if anyone remembers the ring-bound English flash-card book with the stick-figure drawings, please let me know!

In a media-soaked world obsessed with lifestyles of the rich and famous, we are in danger of forgetting that the most intriguing stories are those of so-called “ordinary” people.

I believe that every life is extraordinary, but it takes a real story teller to write it down in a way that is exciting, yet which readers can identify with.

This is what Kate Llewellyn does in her autobiography The Dressmaker’s Daughter: a memoir (Pymble: Fourth Estate). From the beginning, I could hardly put this book down. And yet, I’ve had it since it was published in 2008, sitting in the bookcase, waiting for me. I bought it at a writer’s festival where Llewellyn was speaking, and I was so fascinated by her that I bought her book of memoirs. Then I forgot to read it.

In 2008, I didn’t have an ereader, but I’m glad I have the hard copy. For a start, it has a lovely tactile cover, like a piece of lace festooned with a maroon ribbon and dressmaker’s pins holding up old photographs on front and back.

On the back cover is an enticing quotation: “The feel of the cold steel of her scissors clipping around my armpits felt dangerous and lovely. The cloth fell in slivers around my socks”.

Llewellyn was born in 1936 at Tumby Bay, on the Eyre Peninsula in South Australia. She started her adult life as a nurse, then married and went into the art gallery business with her husband, Richard Llewellyn. That sounds interesting enough, but add to that the fact that her husband had been paralysed by polio as a young man and was in a wheelchair, and you know their life together must have had extraordinary challenges.

Intriguingly though, in her matter-of-fact style, Llewellyn shows that at its essence, it is the story of two people and the path of their relationship, regardless of whether they are disabled or able-bodied. First is romance, then disapproval from many around her who think she is making a mistake in her choice of partner. They marry anyway, then there are children and the trials of making a living, Llewellyn’s mental illness and recovery, and, ultimately, the sad breakdown of the marriage. It’s not what you might expect: Llewellyn’s husband fell in love with someone else and ended it.

That is not the end of the story, though. After they divorced in 1972, Llewellyn went to university, graduating in 1978 at the age of 42 with a BA. While still a student, she became a poet and went on to write about 20 books, including non-fiction works on gardening and travel. Her path to becoming a writer is inspiring and shows we don’t know how good we might be at something until we try it.

One of my favourite parts of the book comes at the beginning, and is the evocative description of a hot summer at Tumby Bay in 1941, when “day after day it was forty degrees”:

“There were no angles except where the jetties joined the beach. Everything was curved and everything was bright. The light went on all day and the sun bore down, peeling our noses, bleaching our hair and, when we played in the sea in our bathers, turning the tops of our shoulders red. My brothers seldom wore shoes and everybody learnt to swim without being taught. One day, we could dog-paddle and the next we could swim.” (Llewellym 2008: 4).

This book is 427 pages, but when it ended, I wished it were twice as long. I think it’s because Llewellyn never gets bogged down in details. It is, rather, scenes from a life both ordinary and extraordinary, told in a simple, honest style. Llewellyn doesn’t big-note herself, but nor does she put on a self-deprecating or insincerely humble manner.

I highly recommend this book, particularly to those who are trying to write their own memoirs.