Usually, when I’m looking for a new novel to read, I go by topic, setting and storyline. I might read some reviews from trusted sources, though they don’t necessarily sway me.

But there are just a few authors whose work I will read regardless of its plot. Just the byline is enough to get me in.

Here, in no particular order, is a list of some of my favourite authors right now, who have me at the mention of their name, and why I love their work:

This US-based Australian journalist-turned novelist and recipient of the Pulitzer Prize writes extraordinarily beautiful prose, meticulously researched but never slow or boring in its detail. She’s one of those writers who makes me sigh to myself and mutter, ‘Why would I ever bother to write’?

I can recommend March (2005), her story of the US Civil War experience of Mr March from the classic American children’s novel Little Women; and Year of Wonders (2001) set in the UK in 1666 during the bubonic plague.

When I read Donohue’s riveting novel The Stolen Child (2006), a modern take on the ancient tale of the changeling, I was astounded. For me, it was one of the most imaginative novels I had ever read. The story transports you to a parallel world where two realities can exist side by side.

His follow-up novel, Angels of Destruction (2009) is also intriguing, concerning the case of a child who turns up at a woman’s door claiming to be her daughter who went missing nine years before.

OK, here’s a disclaimer: Savage is a friend of mine. But that’s not why I read her books. She and I got to know each other only after I started reading her novels and determined that I would read everything she wrote.

I’ve read and can recommend all three in her crime series featuring Jayne Keeny, PI, Behind the Night Bizarre (2006), The Half-Child (2010), and The Dying Beach (2013). If you like gritty crime thrillers with integrity, set in the fascinating culture of Thailand, these novels are for you.

Savage lived in South-East Asia herself for many years before returning to Australia, and this shows in her authentic descriptions. Her books are set in the near past, around the same time I was living in Thailand, so they’re of interest beyond their engaging plots, as well.

I’ve discovered Richardson’s books this year, thanks to my blogosphere friend Margot Kinberg at Confessions of a Mystery Novelist. Richardson comes from the same part of New Zealand’s South Island as I do (Dunedin), which is what first peaked my interest. Once you start one of her crime novels, I assure you that it is very difficult to put it down or to think of much else.

I can recommend her fabulous series with TV journalist Rebecca Thorne as the protagonist, the latest of which is Cross Fingers (2013). While set in the present, the book has Thorne researching a cold case during the tumultuous events in NZ during the 1981 tour of the South African rugby team, the Springboks. This writer has an uncanny ability to put pace into her narrative, and to take the reader to the scene.

Incidentally, you won’t find a picture of Richardson’s book cover above, because I’ve read her books on my Kindle. But such is her skill, the medium on which you are reading is immaterial, because you are soon immersed in the story.

I resisted reading Albom’s books for ages, because everyone was reading them and raving about them. But they were right. When I finally took the plunge, I found them to be real page-turners. The Five People You Meet in Heaven (1997) didn’t even sound like my sort of book, being a sort-of modern day twist on Dickens’s A Christmas Carol. But it’s fabulous, believe me—just read it.

What I like also about Albom’s books is that they’re short and easy to read. You can finish one within a few nights of bedtime reading. Tuesdays with Morrie (2003), about a young man who has the opportunity to glean the wisdom of his former professor as he is dying, is extraordinarily wonderful, too.

The big, meaty, atmospheric historical novels by this Australian novelist are set in the UK among the castles, ruins and family secrets of bygone eras. She manages to get me in from the very first page of each of her novels.

The Shifting Fog (2006) is set in two time zones, 1999 and 1924, which is a plot device that always intrigues me. The story concerns a film director who is making a film about the suicide of a poet at a manor house in 1924, and who discovers that a housemaid from the time is still alive. So the film maker travels from the US to the UK to interview the 98-year-old. The plot involves a perfect Edwardian summer, a shocking secret and its revelation.

Equally riveting is The Forgotten Garden (2008), concerning a young woman who inherits a cottage with a secret garden on the Cornish coast, and discovers a mystery concerning a missing girl from nearly a century before.

One of the world’s most prolific authors, I first came across McCall Smith when I read The No. 1 Ladies’ Detective Agency (1998), set in Gabarone, Botswana. There are now at least 15 in the series, of which I’ve read 12, and they are all delightful, particularly for their wonderful titles, including The Kalahari Typing School for Men and Tea Time for the Traditionally Built (a bit of an in-joke for readers). The series concerns the wonderful Precious Ramotswe, who sets up a PI agency with a small inheritance from her father.

The stories have been called ‘gentle’ and ‘delightful’, and that they are. However, I think they are deceptively simple: McCall Smith deals with some of the harshest and most difficult problems affecting the world today, and his novels always make me think. I’ve also read and loved several of his other series, including the Isabel Dalhousie, Professor Dr von Igelfeld and 44 Scotland St series (of which The Importance of Being Seven, pictured, is one), and have enjoyed them all. But No. 1 is his best.

How thrilled I was to discover that Ursula Bischoff, the writer who translated my own novel The Occidentals into German, was also McCall Smith’s translator for The No. 1 Ladies’ Detective Agency.

I have to read a lot for work, so for recreational reading, I have time for only about 20 books a year (sometimes more, depending on my workload). So, everything I read has to engage me, because reading time is so precious. 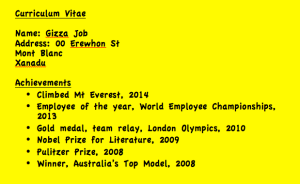 ‘Dear Mr Job
Thank you for applying to be a burger flipper at our restaurant chain. The standard of applicants was very high and, unfortunately, you have been unsuccessful at this time. However, we will keep your details on file and contact you should a suitable position arise.’

You know when you go to a job interview, and the interviewer asks you a seemingly simple question, but it turns out the correct answer is not the obvious one?

I read such a story on one of my favourite news websites, RocketNews24, the other day that inspired this blog post.

The story was about an applicant for a job at McDonald’s. During the interview, the teenager was asked, ‘What kind of place do you think McDonald’s is?’.

He answered, ‘It’s a place where people eat hamburgers’.

He knew he’d made a major error when the interviewer looked at him witheringly and replied, ‘It’s a place where people are raised’.

The interview was over and, needless to say, he didn’t get the job.

Now, knowing how tough it is out there to get a job these days, I thought I’d help out by doing some research and providing the right answers to similar questions should you find yourself applying at one of the following top companies.

I’ve taken the answers for these hypothetical interviewers’ questions from advertising, blurbs and mission statements on the companies’ own websites. Good luck with your search!

Interviewer: What is Coca-Cola?

Applicant: A high-sugar fizzy drink or an artificially sweetened fizzy drink, depending on which type you buy.

Interviewer: No! At Coca-Cola, we’re in the business of spreading smiles and opening happiness every day all across the world.

Interviewer: What is Gatorade?

Interviewer: NO! It fuels the best and the best of the future. It is a product that will help you work harder, for longer; scientifically proven since 1965.

Interviewer: What is Google?

Interviewer: What is Cadbury?

Applicant: A brand of chocolate, most famously dairy milk chocolate.

Interviewer: No! chocolate means different things to different people at different times, but most importantly, Chocolate is Cadbury, with a passionate commitment to making everyone feel happy.

Interviewer: What is KFC?

Applicant: A place where people go to eat fried chicken.

Interviewer: Most definitely not! It’s a place that knows its responsibility goes beyond ensuring great-tasting, high-quality food. It is a place that aims to make a positive difference to the communities where it works, the wider environment and, of course, to the lives of its employees.

Interviewer: What is Coles?

Applicant: A place where people go to buy groceries.

Interviewer: No! It’s a place that is dedicated to giving Aussie families the products they need for a happy, healthy home life, at prices they can afford.