If you’re a writer, you can probably relate to the idea of there being so many books to write and so little time in which to write them.

I am constantly coming up with great ideas for books, first lines, characters, titles and so on. I have a file for them—well, a few files, actually. I have grandiose-looking title pages with bylines and a copyright line…and no other content. I have outlines, first chapters, premises, character studies, film and stage adaptation ideas. 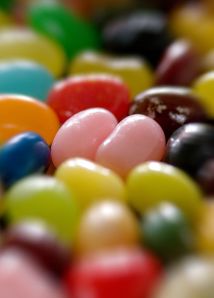 The problem is, I am like a child in a candy store: you flit from this piece to that, each one sweeter and more vibrantly coloured than the last. But, sooner or later, you get sick of eating sweets and you crave a nutritious meal.

If you want to continue being a writer, you have to make a decision, knuckle down, and write one book at a time. From start to finish. From cover to cover.

I have book ideas from 20 years ago that “might come in handy one day”, just as my grandfather had a shed full of jars of nails, nuts and bolts of different sizes and my father had jars full of hundreds—perhaps thousands—of rubber bands.

I have to realise that I don’t need all those jars of bits and pieces. They will not come in handy.

It’s time to clean out the ideas file and all its cobwebs.

It’s time to get rid of the drafts of my books—they have been published already, so I really don’t need them. I am never going to be such a famous writer that draft marginalia will be worth buckets of money to collectors one day. I don’t have children to pass them down to.

I even have a manuscript written by an old friend of mine who, when she went overseas nearly 20 years ago, asked me to look after it “in case you ever hear of a publisher who wants it”. We lost touch, but I’ve kept it all this time and I’m trying to find her now to see if she wants it back.

There is a finite time in which to write. I have lived more than half my life. I need now to prioritise and to focus on projects one by one that I can research, write, edit, and get published.

Simplifying my writer’s shed with its jars of figurative nuts and bolts and rubber bands will give me more room in which to work, a clear bench on which to craft my works, and a direction in which to proceed.