My friend Kenny wrote this engaging, nostalgic piece about his mum’s cooking, which made me also remember what it was like growing up in NZ in the 1970s. Like Kenny, I’m from Dunedin originally and so is my mum, though I was brought up in Auckland from the ages of 7-9 and 12-17. Bennie and his father have just returned from a quickie four-day visit to New Zealand –  to New Plymouth in the North Island region of Taranaki, to be precise.

The ostensible reason for the visit was to help Bennie’s Grandma, Pauline Ethel Weir, celebrate her 80th birthday.

But it was more than that, as it was a triple-banger 80th birthday party taking in also the milestone’s of Pauline’s brother-in-law Russell (Kenny’s uncle), and his partner Jean.

And it was far more than that again, as relatives and friends flew or bussed in from all over New Zealand and Australia.

It was a family reunion of the likes never before experienced by myself, let alone Bennie!

Over three organised events on the Saturday and the Sunday and more informal get-togethers, tales and family lore were exchanged and rolled out.

These are the best photographs I’ve ever seen of Burma, magnificent in their composition, their juxtapositioning, and in capturing the moment. I walked into Burma from Thailand in the 1990s for a day, but these make me want to go back and take a proper look. 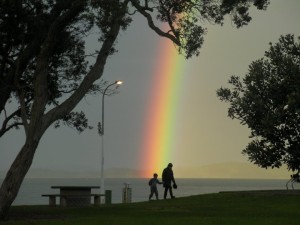 I was thrilled to hear yesterday that my country of birth, New Zealand, agreed in Parliament to legalise same-sex marriage. This makes it the first country in the Asia-Pacific region to do so.

Although I left NZ in the late 1980s, I have never changed my nationality, I visit often and I still feel very much a New Zealander. So I am proud when I hear that NZ has taken such a big step toward equality of all its people.

NZ has many problems, like any other country, such as a growing economic division between rich and poor,  outrageous real estate prices in major cities, an over-emphasis on commercialism, corporate greed and materialism in some quarters.

But it also has, at heart, a people with a generous spirit, people who believe in equality, be it in regard to gender, race or sexual orientation.

Like Flick, the “little engine that could” in the children’s story, NZ to me is the “little country that could”. This group of dots in the Pacific Ocean has certainly made its mark on the world, and I wanted to celebrate some of those firsts in my blog today. There are, of course, many more, but these are a few that I know of:

There are lost of firsts in terms of inventions, technology and scientific advances, too:

But going back to yesterday’s step forward regarding human rights, I believe that in order to achieve a peaceful world, we must treat people equally. All people must have the same opportunities to live in safety and comfort, to pursue happiness, to be educated, to earn a living, and to marry the person they love. Parliament broke into song yesterday (Pokarekare Ana, a traditional love song) when the results of the vote were announced. If you missed this very moving moment, catch it here: NZ legalises same-sex marriage

I hope, too, that this step forward will prompt politicians in Australia to do the same. So far, both the federal government and the opposition are saying they will not. But it’s only a matter of time, surely. 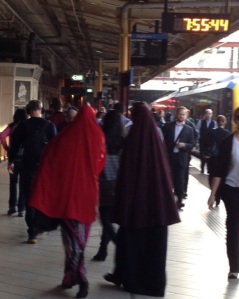 Platform 1, Flinders St station: Yes, it’s 7.55am and I am rushing to my second train connection of the day. Picture: Caron Dann

I thought I had left the rat race behind years ago. But for the last month or so, I have found myself having to travel to work with all the other madly scurrying rodents who must be at their desks before 9am.

I have to take two trains and a bus to get to work. It’s better than driving in peak traffic though, and parking would cost me more than $100 a week, not to mention petrol. Public transport costs me a mere $30, and for some of the journeys I can get a seat and get emails done or do some reading.

Although I live in a big city, I’ve had the luxury over the past eight years or so of being able to work from home a fair bit, or being able to travel out of peak hour to work.

When I do have to be at work early—which is four days out of five at the moment—it always astounds me just how many people there are everywhere, all trudging off to work at pretty much the same time. As they march off the train to the exits, tickets in hand to “touch off” through the gates, there’s a rhythmical stamp to their progress.

In my teens, I visited Melbourne, Australia, and was entranced by life there in what I saw as the fast lane. When I was in my mid-20s, I left New Zealand to live in Melbourne. I loved the thought of being a city worker. I felt cosmopolitan, sophisticated, excited and energised by the throngs of people, the sky scrapers and the daily rush. 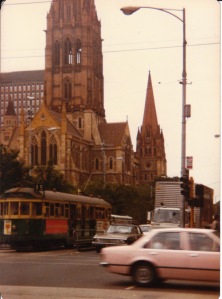 St Paul’s Cathedral, Melbourne CBD, 1981: scenes like this impressed me enough as a teenager to make me move to Melbourne in my 20s.

I got a job in corporate publications at the HQ of a big bank in one of those city sky scrapers. It made me feel very “New York” when I’d get a takeaway coffee and raisin toast or a doughnut for breakfast (I could eat such things in those days). From my 23rd-floor office, I had a sweeping view of the city.

In the 1990s, I went to live in a much bigger city, Bangkok, and revelled in its great mix of culture, history, modernity and tradition.

In the 2000s, I was based in the small seaside town of Sorrento (Victoria, Australia, not Italy!). Whenever I had to go to Melbourne, the noise of the crowds and the traffic would accost my ears and I would wish to go home immediately.

I’ll never forget one fine Friday afternoon in Sorrento. I was out on a boat with some friends, and we were fishing, the three of us lolling on the deck, cutting up bait and drinking tea from a thermos. The sea was like glass, and all we could hear was its gentle lapping against the boat. On the horizon, we could just see the hazy cityscape of Melbourne. My friend squinted towards it: “There are people in all those buildings, sitting at desks and working as we speak,” he said. “Glad I’m here.” And we went back to our fishing, with no more than the thought of fresh King George whiting for dinner on our minds and whether or not to put parmesan in the crumb.

Now, I live quite close to the city centre (16 minutes by train), but far enough away that I can’t see or hear it. I can still appreciate a great CBD: a night-time skyline, cathedrals, beautiful book stores, the perfect coffee. But the daily drudgery of having to queue up, push, rush, open bags for security, have tickets checked, and so on leaves me cold. And don’t get me started about rudeness, aggression, people who don’t keep left up stair wells and round corners, and people who rush past you to grab a seat before you get it.

When I go to a city, I’d like it to be not because I have to travel through it at some ungodly hour for work, but because I’m visiting to sample all it has to offer. And therefore, it wouldn’t be at peak times. Count me out of the rat race.

Here’s a thought-provoking take on the controversial question of copyright and how old laws need to be revised to accommodate the internet. When Shakespeare plays were originally performed, it was not allowed for audience members to bring in paper for fear that they would write down and steal the plays. To counter this, furtive audience members would go to performances and each remember different sections of the plays, then meet later and write down all they could remember. Each section was then stitched together, and the works were stolen regardless.

With the development of the printing press, pirated material began to be spread rapidly. Action was taken politically to attempt to stop intellectual property from being copied or stolen. In 1662 the Licensing of the Press Act was passed to restrict the reprinting of material without advance permission from the owners. This act planted the seed for the establishment of copyright law.