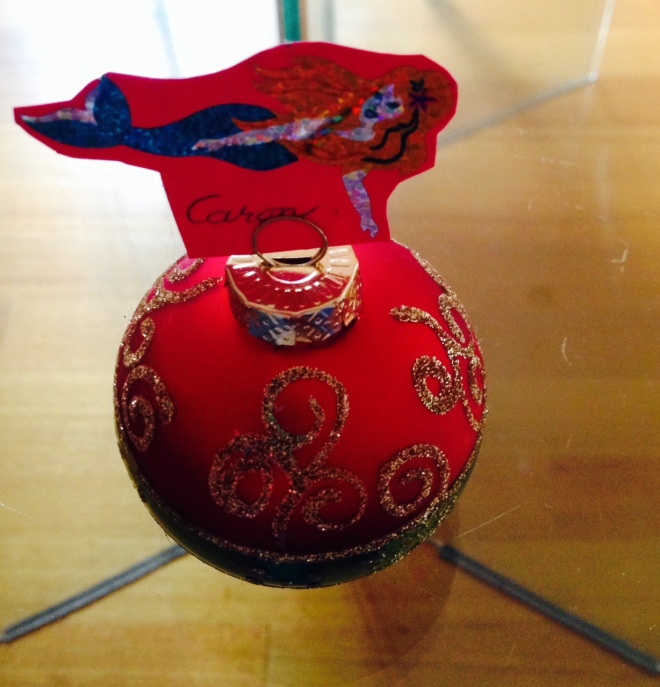 My place settings at the Christmas table have names attached to baubles, which I reuse each year.

For the first time, we actually went shopping on Boxing Day this year. For my friends in the US and other countries where they don’t have Boxing Day, that’s December 26. It is a national holiday and traditionally the time of post-Christmas sales (when retailers get rid of all the rubbish they couldn’t sell at inflated prices before Christmas).

However, we went to only one shop on Boxing Day, and it was for my husband to buy me a pre-approved present for my birthday, which is coming up soon. More about that in January.

Anyway, the shopping centre carpark was even more congested than it had been leading up to Christmas. It always astounds me that after the consumerist excesses of Christmas, people are still eager to acquire more stuff.

In the shop we went to, I saw people buying up huge baskets and trolleys-full of junk…for next Christmas. Themed serviettes, tree decorations, cards, wrapping paper and the like. I felt a pang of pity for them, actually, as if they have nothing else to look forward to except next Christmas, yet most of them will be under such financial stress that they have to buy stuff for December 2015 in December 2014 when it’s on sale.

Yesterday morning, fittingly, there was an interview on the radio with a woman who helps people de-clutter their houses. That is, get rid of the excess stuff. I remarked to my husband what a ‘first-world problem’ that was: having too much stuff, when most of the world doesn’t have enough.
I thought of all those useless baubles: the tinsel, the discarded cards, the wrapping paper, the table centrepieces. Imagine how many millions of dollars people spend on these every year. Do you really need a plastic reindeer and fake snow in a country where it’s summer at Christmas time and reindeer belong to countries across the other side of the world?

Not to mention the heaps of gifts that are unappreciated—and also the reason many people go to shopping centres on Boxing Day, to return stuff they didn’t like. Other unwanted gifts are just put in the back of a wardrobe, to be trotted out when the giver visits. Some are even re-gifted, of course.

I’m lucky: I seem to always get great presents that are things I want or can use productively. But I know lots of people don’t.

How about this idea? Instead of running around buying loads of presents for family members, everyone in the group draws a name out of a hat and buys one good present for that person. Each person provides a list of things they would like to a pre-determined amount. Result: you have to buy only one present; that present will be exactly what the person wants.

The world’s loneliest egg timer: stuffed in a cracker, then left behind on Christmas day.

Here’s an ironic tale to finish: this year, I spent $50 on a box of 6 extra-special Christmas crackers (Americans, you can see what these are here). This is because I usually spend about $20 and the prizes are all rubbish, and most people discreetly leave them behind when they depart.

The prizes inside my super crackers were indeed much better than normal…but one guest still left his prize behind. It was an electronic egg timer. Cute, but superfluous, nevertheless.