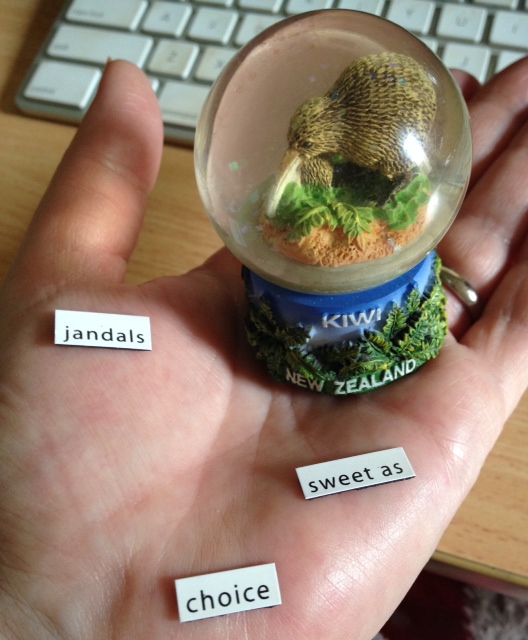 When I was five, my family and I left our South Pacific island home of New Zealand and went to live in England. My school, in Heslington, York, had a Christmas school performance and I coveted the role of the angel, because I would get to wear a lovely white satin gown and a tinsel halo. I was very upset not to get that role. Instead, I would be part of the procession, which celebrated all different nationalities of the British Empire. To add insult to injury, they made me parade in dressed as an Australian, complete with a hat with corks on strings (worn in Australia to ward off flies). I hated that: they didn’t understand that Australia and NZ, though collectively known then as “the Antipodes”, were very different countries. I can still remember walking in that procession, to the applause of all the parents seeing their little darlings dressed up so prettily, but feeling so humiliated, I wanted to cry. The teachers felt sorry for me and let me take the angel costume home for the weekend.

Ironically, I have ended up spending much of my life living in Australia, and I love it. Although I was born in NZ, I’ve spent a little less than half my life there. I’ve also lived in the US and Thailand.

But I identify most of all with being a New Zealander—or Kiwi, as we’re colloquially known. I’m at least sixth generation, which for a pākehā (white NZer) is a lot. The name “Kiwi” is, of course, after our unique national bird, the kiwi. Americans in particular might know better the fruit, which they call “kiwi” as well, but we always call “kiwi fruit” now. When I was growing up though, it was known as a “Chinese gooseberry”, because it is native to China, not NZ—the Kiwis just came up with a brilliant marketing idea!

I love being a New Zealander, and even though I haven’t lived in my home country since 1988, I go there every year or two. I always enjoy flying in and seeing that green, green grass of home, to steal a line from a famous song.

Australians and New Zealanders can tell each other apart in a moment by our accents. But much the same as Canadians and Americans, we often get mistaken for the other by outsiders. I knew I must have picked up some Australian vowel sounds a few years ago, when someone in Auckland, NZ, said to me, “Are you Australian?” But most Australians can pick me straight away as a Kiwi.

As well as nuances in our accent, we have lots of different sayings and terms for the same thing, and that’s what I illustrated in the photo on this post. So, “jandals” in NZ are called “thongs” in Australia, and “flip flops” in England. They’re those rubber sandals held on with a thong between the big and second toes.  The term “jandals” is never used in Australia, except by New Zealanders who want to be laughed at, but I’ve gone back to it. The word is perfect for this type of footwear, and was originally a trademark made in the 1950s from a description of the product’s origins, “Japanese sandals”.

We have a few NZ shows on TV in Australia now, and this has put me in touch again with our vernacular. If we like something a lot, we say “Choice!”, but we often pronounce it like “Choooooooooiiiiice!”. (The opposite is “Stink!”). And if we’re cool with arrangements, such as “I’ll pick you up at 7 and we’ll go to the movies”, we say “sweet AS”.

This post was written for Rara’s International Label Day post, in which participants identify themselves with labels, which I reckon is choice! Anyway, if you want to take a look at all the other cute labels in that post, you can access them here, OK? Sweet as!