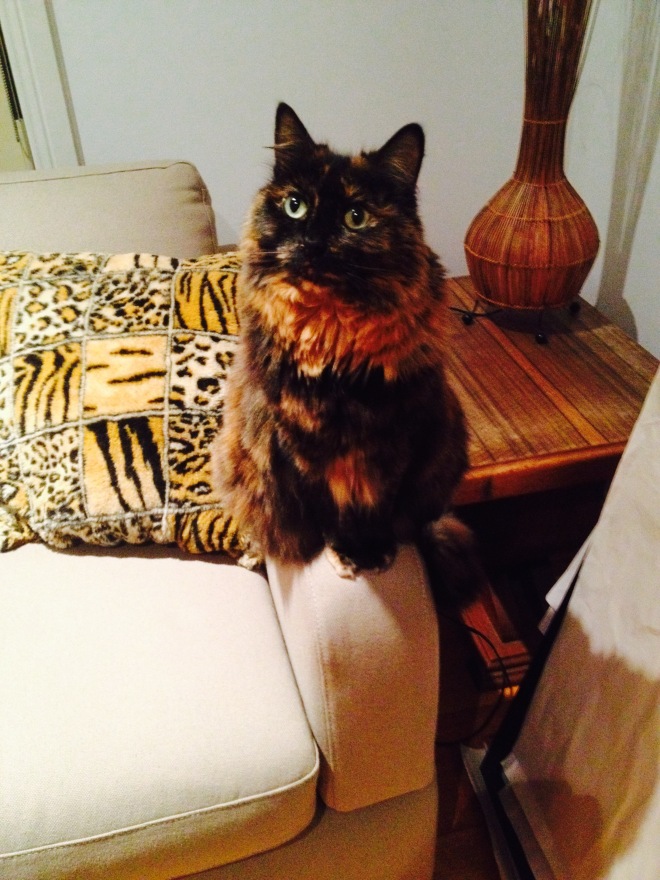 My much-loved cat nearly died this week , and I’ve been beside myself with worry. I’m happy to say she has suddenly started to improve, but for a while there, I feared the worst.

My husband explained best how we felt when I heard him speaking on the phone to a friend: “We’ve had her nine years; she’s part of our family,” he said. (She, being a cat, would maintain that she is in fact the head of our family, I’m sure).

I’ve always been a ‘cat person’. My parents had a cat before I was born; for all my childhood and whenever possible in my adult life, I’ve had cats. When I don’t have a cat, I feel like something’s missing.

My husband and I have both had bad luck with beloved cats being run over, and when he bought a tiny, fluffy tortoiseshell kitten for me just over nine years ago, we decided she would be an indoor cat, allowed outside only as far as our courtyard.

Lucy Locket has been a great indoor cat. She’s naturally lazy, timid, averse to strangers and likes her home comforts. She probably could jump the fence if she wanted, but she doesn’t.

That was the way, we thought, we could have our pet for a long time.

But that was in doubt this week when she came down with a serious mystery illness: she was barely able to walk, was not drinking or eating and had a very high temperature.

The vet admitted her to the hospital in his clinic, and there she stayed for three days on a drip and medication.

They couldn’t get her to eat, and it’s very dangerous for a cat to go beyond three days not eating, because of possible liver complications.

But she was so traumatised by the hospital experience, that she had lost all interest in food.

So we had to bring her home to try to coax her to eat. I found some great information on line about how to get a sick cat to eat (here’s a link). It was just tiny bits at a time, but at least it was something. Each minuscule amount she ate seemed like an enormous breakthrough.

Then this morning, she was much better. She is eating again (about half her normal amount, but enjoying it), meowing for a brush, and sitting in the sun. She’s still weak, but I can tell she’s improving, because her weird little habits are back, such as scritch-scratching under a bag if it is placed on the floor.

We still don’t know what the illness is. Blood analysis was inconclusive (and two of the three samples clotted), but seemed to point to a virus. It’s not one of the serious viruses such as feline aids or leukemia, as she has no contact with other cats. It could have been an infection “somewhere”, so she’s also had a long-term antibiotic shot.

The worst thing about an animal being sick is that they can’t tell you their symptoms or where it hurts. She’s much better, though, at letting me know she is getting better: from the trot back in her gait, to the demand for a brush, to the quickly turning head when a bird flies overhead.