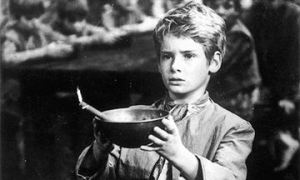 Mark Lester as Oliver Twist in the 1968 film Oliver

When you hear the term “orphan”, a sad picture of a parentless child comes up. Think Oliver Twist, the fictional boy in an orphanage who dared asked for more porridge and who asked plaintively, “Where is Love?”.

Sadly, some children are made orphans. But by far the majority of orphans are actually adults, some of them seniors themselves by the time both of their parents have died. Indeed, my father-in-law was 78 by the time his mother died at nearly 102. When he died just eight years later, in 2014, he left three adult orphans behind: orphans with grown-up children of their own, and two of the three orphans with grandchildren. But orphans, nevertheless.

The first time I thought of the adult orphan was when my mother’s father died, just a few months after her mother. the first thing she said when she came off the phone was, “I’m an orphan”.

Technically, the term refers to a child who has lost both parents (or, interestingly, to an animal who has lost its mother). But the term “adult orphan” is sometimes used.

It doesn’t carry with it, however, the same connotations of sadness, destitution, or the horrible possibility of an orphanage.

Yet the loss of one’s parents is devastating for many adults, even if both parties are “old”. When the first parent goes, it is a shock; when the second goes, I am told you feel rather alone and vulnerable, mortal after all.

Luckily, I’m not an orphan, because I still have my mother, and you can’t be half an orphan. My mother, in her 70s, says she still thinks often that she would like to ask her own mother or father something, then remembers they’re not here to ask. (And when her sister died recently, she became an only-child adult orphan, as she reminded me when I was writing this piece).

When the parent of an adult dies, particularly of an older adult, it seems that most other people don’t take much notice. That is, they might say how sorry they are, put a message of condolence on Facebook or send a card, then everything goes on as normal the next week.

Yet the bereaved are suffering just as much as if they’d been younger when their parents died. They might not have missed out on the guidance a parent can provide while you’re young, but having a good parent or parents is comforting at any age.

When they’re gone, the world is a different place.

4 thoughts on “The adult orphan”