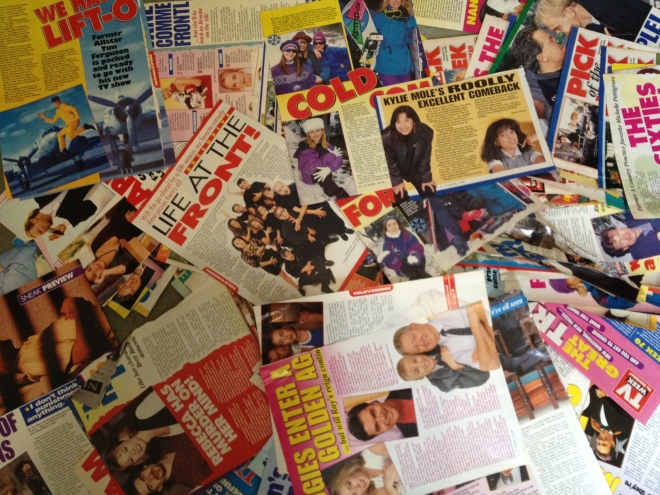 There’s my interview with Tim Ferguson for Don’t Forget Your Toothbrush. You can just see it on the upper left of this collage of stories I did for TV Week in the 1990s

You know when you’re miserable with a cold, but you either can’t take the day off work, or you have something so important to do, you couldn’t possibly stay home unless you were unconscious?

Through much of the 1990s, I worked as a journalist for TV Week magazine, which was then Australia’s highest selling entertainment weekly. One day, I had an interview scheduled with Tim Ferguson, a comedy star who had been part of the very famous and edgy group The Doug Anthony All Stars, which had toured nationally and internationally and had appeared regularly on TV.

DAAS had broken up, but Ferguson now had his own quirky game show series, Don’t Forget Your Toothbrush. Modeled on the hit British show of the same name, it involved cheesy games and random travel destinations. Here’s a picture from the very kitsch launch party at Channel 9. I’m the one in the middle. Ferguson, smart man, does not appear in this photo.

Anyway, in conjunction with the launch of this show, on another day I was to do an interview with Ferguson. This particular day, I had a heavy head cold, but we needed the interview for the next edition, and I couldn’t really get out of it. So I struggled on.

The interview was difficult: the cold was at its peak, and I had to keep leaving the room to blow my nose and cough. This was mortifying for me, such is the vanity of youth. I was rarely ill and saw it as a failing on my part. If only I’d known then what I know now about what Ferguson himself was going through privately.

Now, most celebrities, if you turn up with a cold, will look horrified, because they don’t want to catch it themselves. Witness the reaction of Katy Perry to Australian interviewer Jackie Frank when Frank reveals she has a cold (“Are you *gulp* contagious?”):

Ferguson, however, was different. “You poor thing,” he said. “I think you need Lemsip.”

He couldn’t believe I had no idea what this was. For the record, it’s a concoction of lemon-flavoured medication you add hot water to and drink. (This is not product placement, by the way, but it still does exist!).

Anyway, later that day, a package arrived for me: it was a packet of Lemsip and a cartoon by Ferguson that I still have, of me trying to do an interview with a cold. Well, I know I still have it somewhere. Unfortunately, with our recent move, lots of things whose whereabouts I thought I knew are not where I thought they were. Well, if I find it, I will update this post.

Little did I know back in 1995 that just the year before, Ferguson had been diagnosed with MS (multiple sclerosis), and of course had a huge upheaval in his life at the time because of it, including having to break up the fabulous group DAAS, because their touring and stage performances were too physically demanding. Beside what he was going through, my silly little cold seems just an embarrassment.

Ferguson kept the condition to himself and didn’t reveal it publicly until about 2010. But in his typical way, he has made the best of it, writing, lecturing and speaking, and even making light of his condition, performing a one-man show about life with MS called Carry A Big Stick. You can read more about his inspiring story here.

So thanks, Tim Ferguson: besides your talent and tenacity, you are officially the nicest, most empathetic celebrity I ever interviewed.

2 thoughts on “Long ago interviews #2: the celebrity who cared”