As I was having breakfast one morning, I heard someone next door hammering nails into the fence. This was a good thing, I thought, since our fence was about to fall down and the landlord was not interested in fixing it. Unfortunately, they weren’t working on the fence between us and them, but between them and the next dwelling. Oh well.

It got me thinking, though, about the fact that fences still need to be fixed and painted, in the same way they’ve always needed to be.

This, despite the amazing technological advances of the 20th and 21st centuries; despite the fact that I can write an email and send it to someone in Iceland and have an answer from them in a few moments; despite smart phones with apps for everything from spirit levels to measuring your heartbeat to doing your shopping; despite reports of 3D printers being touted as the next great thing that will be able to grow body parts and print cars; despite all this, you still have to fix the fence. And when you do it, you still usually need a hammer and nails, pretty much the same gadgets our forebears were using thousands of years ago. There’s not an app to do that, now, is there!

There must be a better way.

All around me, I see in our house and in the houses of everyone else I know, design from a bygone era of servitude. This was the era when rich households all had servants to work full-time on cleaning and maintaining a property, while not-so-rich households had women to work in this role, even when they took paying work as well. 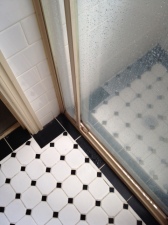 Out with grouting, tiny tiles and difficult shower doors

Today, few people have servants; few women accept that their entire role in life is to clean up after others, acknowledging that, even if they work at home full-time, they should still be able to have some time off, the same as any other worker. In such a time, we should be making houses that need a minimum of maintenance. Architects, engineers, designers, and builders, please take note!

*I don’t want fancy “period style” doors that collect dust. For example, each of the doors inside my rented townhouse has 91 separate surfaces to clean. The front door is the same, and there is also a decorative screen door (see picture). Ditto cornices and skirting boards. I blame the penchant for Victorian style in all its fussiness. Although mine is a late 20th-century house, it was built in Victorian style, which has been very fashionable for a few decades. 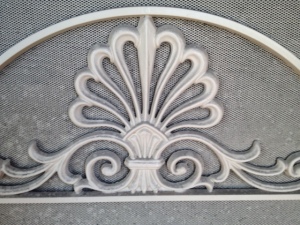 *I don’t want wooden fences that warp and spring out of their nails. I don’t want to have to paint a fence every few years.

I have seen pictures of amazing houses designed by top architects that have all smooth surfaces that need little maintenance—but they have multi-million-dollar price tags. That’s well and good, but I’m talking about houses for the ordinary person.

My idea of the perfect house would be the lowest maintenance place possible: no fancy edges round the walls or light fittings, no tiles with grouting. The decorative touches could then be added via soft furnishings, beautiful artwork and sculptures…which would all need cleaning, I know.

8 thoughts on “You still have to fix the fence or, Dear Architects: Let’s Drag Houses Into the 21st Century”