The first hardback book I remember buying myself was A Little Princess, by Frances Hodgson Burnett, for the princely sum of $3.25 in 1975. I remember seeing this book in the window display of a children’s bookshop in Mission Bay, Auckland.

I was living with my grandparents for a year while my parents were overseas, and they had sent me some money for Christmas. I spent the bulk of it on this book, and it still sits in my book case today. I thought the cover quite the most beautiful I’d seen. I had first been entranced by this story when I saw on TV the Shirley Temple movie adaptation from 1939. 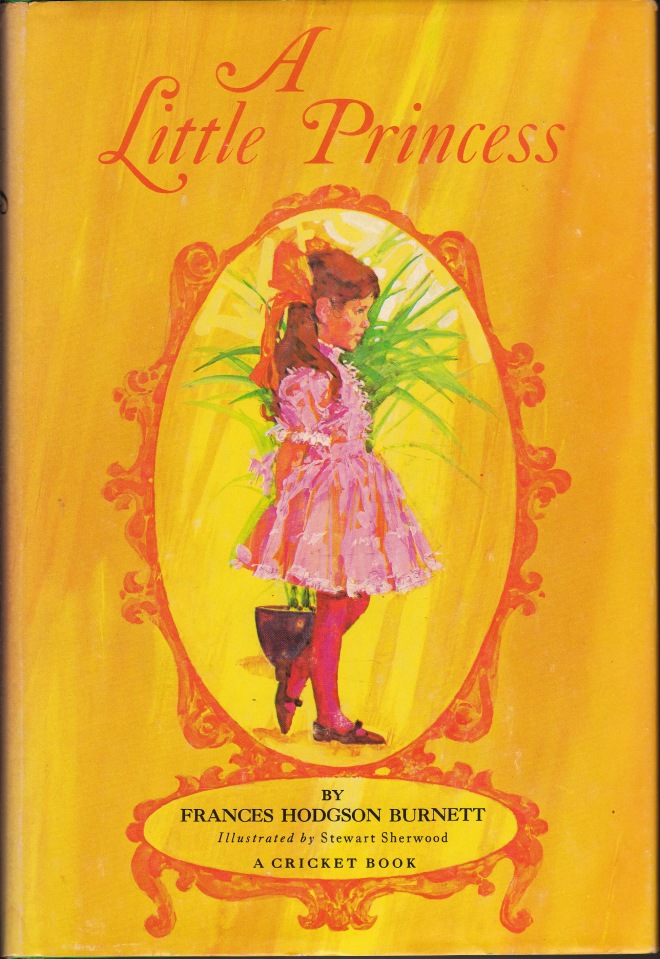 My edition of The Little Princess was published by Platt & Munk in 1967, though I didn’t buy it until 1975. The dust jacket says the artist is Stewart Sherwood, a 24-year-old Canadian, who despite his youth had already won many awards for advertising art and had been published in books and magazines across the US and Europe. (Googling Sherwood reveals he is still an artist, painting designs for books, cards and collectable plates. You can see more of his artwork here). This is why I always like books with dust jackets: they contain information not elsewhere in the book. One library I frequent infuriates me by removing all the dust jackets, instead of covering them and leaving them with the book.

I saved my pocket money to buy books from the age of seven. Dad gave me 10c a week, pitiful even in those days. My parents didn’t really believe in the concept of pocket money, but conceded this miserly amount when I insisted. I then made a case that, because I was older than my brother, I should receive more than him. Dad reluctantly gave me 11c a week, provided I never divulged the raise to my brother. How I wanted to gloat to my brother…but couldn’t, lest the extra 1c be removed.

This edition, published in 1970 by Green Knight (but first published in 1942 by Hodder & Stoughton) has a list of prices for different countries of the British commonwealth on the back: UK 3/- (shillings) or 15p, Australia and New Zealand 45c, South Africa 40c, Canada 65c. The book was illustrated by Eileen Soper (1905-1990), who was also a writer and illustrator of children’s books in her own right, and a founding member of the Society of Wildlife Artists in the UK.

My favourite paperbacks were the Famous Five and Secret Seven series, written by Enid Blyton in the 1940s. I loved the idea in them that children could make a difference, could have a whole world beyond the realm of their parents, and could go on exciting adventures without the presence of adults.

I always keep price tags on the books I buy, and have done since I was a child, because I find pricing very interesting years later.

I still have one of the first books I bought, Five on a Treasure Island, which the back cover tells me cost 45c in the early 1970s. I had to save my pocket money for five weeks to buy one of these (with enough change to buy several 3c lemonade ice-blocks in the summer). I would read the book in a day, then read the best bits again, and prepare for the almost interminable wait of five weeks between purchases. It was always worth the wait!

12 thoughts on “The first book I bought”