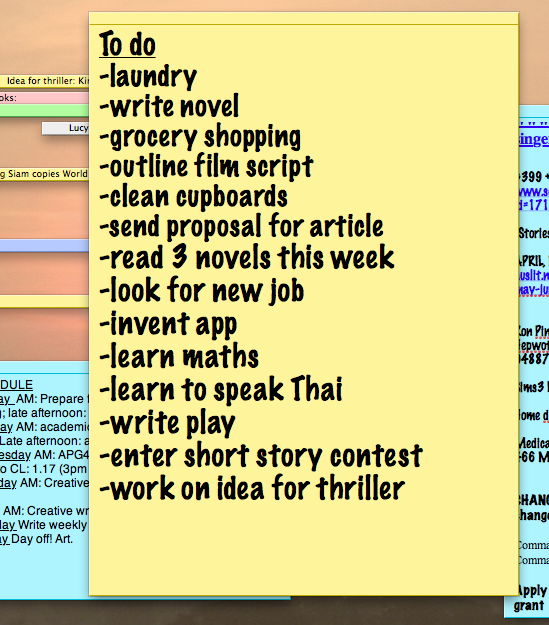 We’re constantly thinking up new things we want or need to do, adding them to the never-ending list, then moaning about never having time to do them. If you are a writer, you probably complain that so many things get in the way to thwart you that you will never finish your novel.

The answer? Don’t have a list! Obviously, it’s good to have goals, but when you have so many that you’ll never have any hope of achieving them, it’s counter-productive. Often you have so much to do, you don’t know where to start.

So, the idea is, only put on your list what you can reasonably achieve.

In one weekend, no matter how enthusiastic you are at the start, you will not be able to clean out the cupboards, start your novel, read a whole book and go to the movies. Pick one and do it. Then you’ll be happy you achieved your goal, and you won’t be disappointed in yourself for not finishing four other things on the list.

Sometimes one day at a time is better than making five-year plans.

I’ve got a long-term to-do list that has been the same for about five years. I never cross anything off it, because I never get to it. So it’s always lurking there on my virtual computer sticky notes, reminding me what a disappointment I am to myself and others. I’m going to get rid of this list soon.

I gave away superfluous clothes from my wardrobe recently. Two big bags full, so now I can find the clothes I wear. The clothes that went to charity were all things I thought I’d wear again. But I haven’t, so out they went, except for a few classics.

So now I want to take the same philosophy to my to-do list. I have to realise that I am not going to be able to write 10 more novels in the foreseeable future—and probably not ever. But I think I might be able to write one, and possibly two or three. So I should just pick my top three ideas and forget about the others. I’ve started all three of them anyway. Yes, I know. I should choose one and go for it. Actually, I’ve got a new idea that I think would be great and for which I could happily put all others aside for a year.

I’m making a new plan to finish my third book and to have it published. To do that, I will have to put all other things aside, particularly to-do lists, though unless I am successful in attaining a government grant, I won’t be able to give up paid employment. Still, eligible applicants have about a one in 10 chance of getting a grant in my category, so it’s better odds than buying a Lotto ticket. 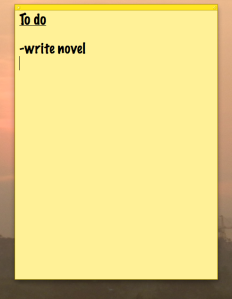 6 thoughts on “Writer’s Diary #6: How to finish your novel: ditch the to-do list”