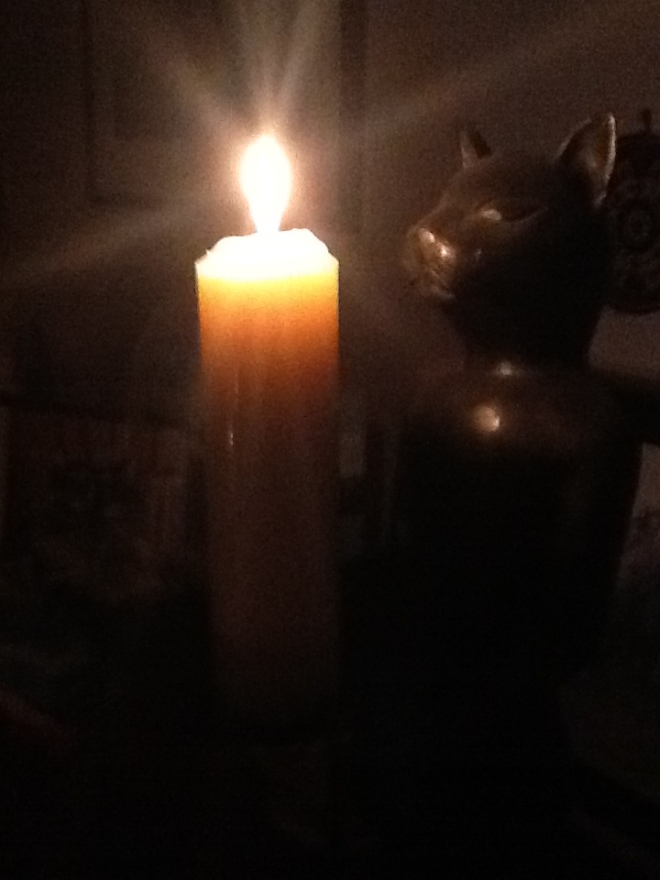 Our street had a power outage on Monday this week when a tree fell in high winds and knocked out the lines. The outage lasted from 12.45pm to 8pm, more than two hours after dark.

Not only did this put me almost a day behind in my work, but we couldn’t run our heating all day and it’s mid-winter. I had neglected to charge my phone and iPad over night, so had little juice left in both.

Power outages probably happen about once a year for various reasons, but they rarely last more than a couple of hours. We knew this one would be different, because there were so many call-outs due to the weather that it took four hours for the repair truck to turn up. And when my husband asked the guy how long it might take to fix the power lines, his reply was,  “How long is a piece of string?”

Never mind. At least we had a warning that we would probably have to spend some time after dark without power. We have a gas stove, so we could cook on that by lighting the gas ring with a match.

We stocked up on fat candles and two battery-powered camping lights, and took out some spare blankets to wrap ourselves in, in the absence of our central heating. My tall Balinese cat candle holder (pictured above) came in very handy.

We usually have dinner between 7.30 and 8.30pm. But this night, we realised it would be difficult to cook by candlelight, so we cooked at twilight. And instead of putting together one fabulous recipe or another, we decided to go simple: toss a salad, butter a bread roll and quick-fry some small lamb chops. Add some store-bought mint sauce and it was delicious. It felt like we were camping—or what I imagine camping would be like, since I’ve never actually been camping (unless you count a week in a camper van).

And the night came tumbling in.

My cat, Lucy Locket, just carried on as normal, jumping up on to the arm of the couch and lashing her tail. Then I remembered, cats can see in the dark, so she probably wondered why we were doing anything differently to usual.

“It’s so black out there,” my husband said, looking out the floor-to-ceiling glass doors and windows in our living room.

It certainly was. And inside, even with lots of candles and the camping lights, there wasn’t really enough light to do anything useful by. He could just see to read a book, but only just.

I’ve said it before, but I’ll say it again: an old-fashioned battery-powered transistor radio is one of the world’s greatest inventions. We moved this little radio from its usual place in the bathroom to lounge central, and it was our link to the world. We learned that thousands of other people were without power in Melbourne that night, too.

It certainly made me think about how much we take for granted in this modern life. A day without my blog feed, without Facebook, Twitter or email, and without access to the internet and to my computer itself felt very strange.

Then I thought about my great-grandmother, Isabelle Abbott, born in the 19th century, who told me in the 1980s that she hated electricity and the gadgets that went with it. The old coal-fired range was so much better to cook on than these newfangled electric stoves and ovens, she said. And as for the automatic washing machine—you could keep it. Electric lighting was overrated. What to do when it gets dark? “Go to sleep”.

2 thoughts on “Cats by Candlelight”