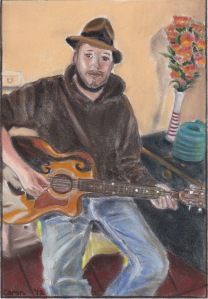 I once interviewed one of Australia’s most successful performers, who had started as a folk singer but moved on to stand-up comedy. He was equally good at both, and I asked him why he chose the latter over the former.

“Well, if you’re good at stand-up, you can always get a gig and it’s possible to make a living,” he said. “But with music, you can be the most talented musician in the world, better than everyone you hear on the radio, and still not be able to pay your bills.”

Although choosing music as a career is about answering a calling, of course it has to be treated as a business if it is to be a source of income. I like the way musicians and other performers, and their supporters, are inventive when it comes to forging a career.

Late last year, my friend Sally organised a music concert in her apartment, featuring her friend Vorn Dolette, a wonderfully quirky folk-with-a-twist singer-songwriter from South Australia. Twenty of us attended the event, paying $20 each for the concert and substantial nibbles, and everyone bringing whatever they wanted to drink.

The result was an intimate performance, highly professional yet much more personal than going to a commercial venue. All the money collected goes to the performer, instead of most going to middlemen.

Afterwards, I did a pastel painting of Vorn during his concert, using a photo I took on the day as a reference. I gave the original to Sally to thank her for hosting such a special event.

4 thoughts on “The sound of music”