Magazine columns, websites and blogs lately have taken up the idea of asking a columnist to write a letter to their teenage self, given the wisdom they have today. My version of this is a bit different: it’s a letter from my teenage self, caught in a time warp and forgotten about for 30 years, a surprising blast from the past.

The occasion was the 30th reunion of graduates from my one-term journalism certificate course at Auckland Technical Institute (now AUT), which I was travelling to New Zealand to attend. My former classmates were coming from throughout New Zealand, from Australia and the US. From memory, about 18 of the 23 graduates were there.

We had two tutors: the formidable Geoff Black and his younger sidekick, Colin Moore. Geoff had died years before, but Colin was in his 60s, still writing and very active.

Colin was delighted to be invited to our reunion, and had made plans to attend. Sadly, just a few weeks before the reunion, he was killed in an accident, crushed between his boat trailer and his van on a boat ramp at Taupo Bay in the Far North (not to be confused with Lake Taupo).

When Colin’s children were going through his belongings, they found he had kept some of his materials from his one term of teaching at ATI so long before. Among them was an exercise we had done at the end of our course, when we’d been asked to write a paragraph about our strengths and weaknesses, likes and dislikes during the term. Colin’s children kindly contacted us and said they would send these papers to us, which would be even more poignant given it was our reunion.

I looked forward eagerly to receiving mine, written by manual typewriter on a piece of old-size journalist’s copy paper. When I received it, I was disappointed that mine seemed so juvenile. My feelings were easily hurt, I said, and I hated the thought that people might be gossiping and laughing about me—though there would have been absolutely nothing in my life for anyone to gossip about in those days, to be sure!

I thought of myself as grown up then, but instead, I reveal myself as a typical mid-teenager. In fact, I exhibit the same characteristics for which I find myself criticising young people today: lack of interest in or knowledge of current affairs, won’t watch the TV news despite wanting to be a journalist, dislike of formal tertiary study (such as lectures and exercises), and an over-emphasis on obtaining money.

My description of myself as putting on a “sweet little reporter act” to “grease people up” was perhaps something I had seen in a movie and was romanticising about: most politically incorrect, these days, but I had done a lot of acting training as a child, after all.

This is what my paper said, strengths and weaknesses on one side, likes and dislikes on the other: 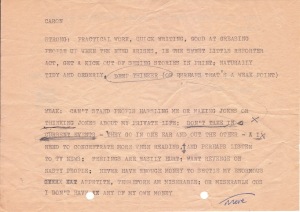 Practical work, quick writing, good at greasing people up when the need arises, i.e. the sweet little reporter act, get a kick out of seeing stories in print; naturally tidy and orderly, deep thinker (or perhaps that’s a weak point)

Can’t stand people hassling me or making jokes about my private life; don’t take in current events – they go in one ear and out the other – I need to concentrate more when reading and perhaps listen to
TV news; feelings are easily hurt; want revenge on nasty people; never have enough money to settle my enormous appetite, therefore am miserable; or miserable cos I don’t have any of my own money. 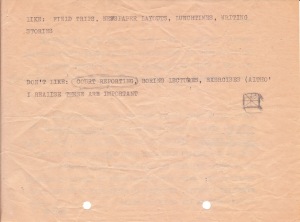 The hand-written marks on the paper show my tutor did actually read it. Oh, another thing it reveals: contradictions. In “strengths”, I claim to be a “deep thinker”, yet in “weaknesses”, I say information goes “in one ear and out the other”. Colin was clearly perplexed at this, and circled it.

It seems strange that I typed this all in capital letters. But perhaps it shows I felt like shouting with frustration, as many teens do. At 17, I wanted to get on with my life, leave home (to the dismay of my family, though they supported me) and be the best journalist I could be. I knew that to do all that, I would need a living wage. I also had a weakness for beautiful and expensive clothes.

I really did wish for more than money in those days—for a start, I thought that one day, I would be a top broadcaster with my own news show, or editor of the New York Times, or a famous actor, or a scriptwriter of films. As a teenager though, perhaps I was too embarrassed to write these things. Teens often give ridiculous or non-descript answers to adults’ questions. For example, when my brother was a teenager, if my mother asked him what he’d done at school that day, the answer would be “Stuff”.

So, if I could write to myself today, what would I say? Well, I’d probably give myself the same sort of advice my parents gave me back then…to which, for the most part, I refused to listen. As my mum says, although “they don’t know what they don’t know” you can’t tell them—young people have to make their own mistakes.

Although I was disappointed at first, all those years later when I was older and wiser, in what I’d written on the scrap of copy paper, now, a couple of years later, I think it has more to say to me than I at first thought. More than anything, it teaches me to be more tolerant of young people, because once upon a time, I was just like them.