This post for Bloggers for Peace is inspired by a photograph taken by my childhood friend, the New Zealand actor Yvette Parsons. She took it while lying in a hammock during her annual break on Waiheke Island, off the coast of Auckland, New Zealand. This looks like paradise to me, and she agrees. It brings back to mind those simple pleasures in life: a good book, warm weather and a gentle breeze, an unspoilt view, nothing much to do but go for a swim, read a few pages and doze the day away. It took me, in fact, back to my own childhood in New Zealand. 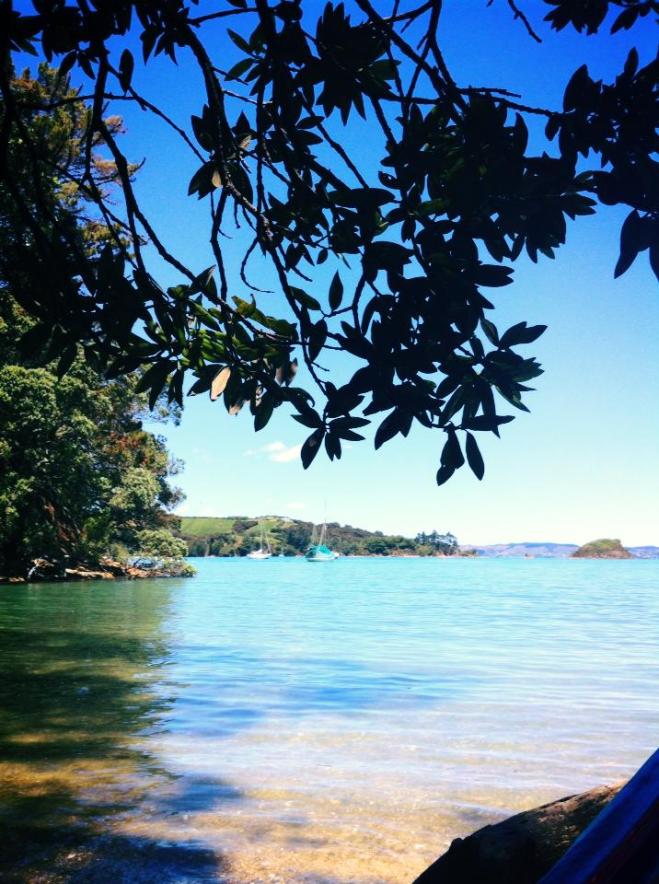 Remember childhood, and how easy it was to find inner peace, even though you didn’t know that was what you were doing? Provided you were lucky enough to have a great childhood, like I did, peace was something you took for granted. As I see it, peace is about safety, shelter, freedom, love and comfort. I was so lucky to have found all these things at home.
To illustrate this, I’d like to share in this post some of my favourite childhood memories:
*Deep, long sleeps, and next morning bouncing out of bed, eager to meet the day ahead. On Sundays, I was told not to get up too early, so I’d lie in bed listening to the children’s requests story hour on the little red transistor radio my parents had bought me.
*Our “under the house house”. This was something my brother, Phillip, and I put together. Under our house was a basement, not big enough for an adult to stand in, but big enough for a child. It ran the length and breadth of the house and contained the wooden foundations which, upstairs, divided the house into rooms. Mum and Dad used the front space by the door to store the lawn mower and gardening equipment. They never went further back: if they had, they would have found our secret house: rooms with curtains (cadged from discarded material), book cases, tables, cusions, cups, knives and forks. It was like a giant dollhouse. Phillip and I would allow only the two neighbouring kids, a brother and sister about the same age as us, to come in. We’d think it hilarious to hear Mum or Dad above, calling our names in vain, not knowing we were right beneath them. Then we’d hear, “I don’t know where they get to”. We never did let on, and Dad eventually found the “under the house house” many years later when he was preparing to sell the Auckland house. He found it just as we’d left it, and it must have been sad for him: I had moved out of home at 17 to become a journalist, and Phillip was killed in a motorbike accident when he was 17 and I was 19.
But to continue with some happy memories from childhood:
*Finishing a homework assignment, and having the rest of the day to play.
*Sprinting across a field, running as fast as I could.
*Ice skating to disco music, skating very fast with the wind in my hair.
*Rolling over and over down the freshly mown lawn at my grandparents’ house, then sitting with my grandad on the deck, sharing his binoculars to watch the yacht races on the Hauraki Gulf.
*Reading Famous Five books under the covers, with a torch, when I was supposed to be asleep. It was like being in a tent.
*That lovely feeling that, no matter what happened, Mum and Dad would make it right. No matter how many kids were mean, or if you’d fallen over and hurt yourself, or been disappointed with a classroom grade, when you got home, you were in that magical world again, our own domain.

5 thoughts on “Bloggers for Peace: Rediscovering the inner peace of childhood”

Error: Twitter did not respond. Please wait a few minutes and refresh this page.